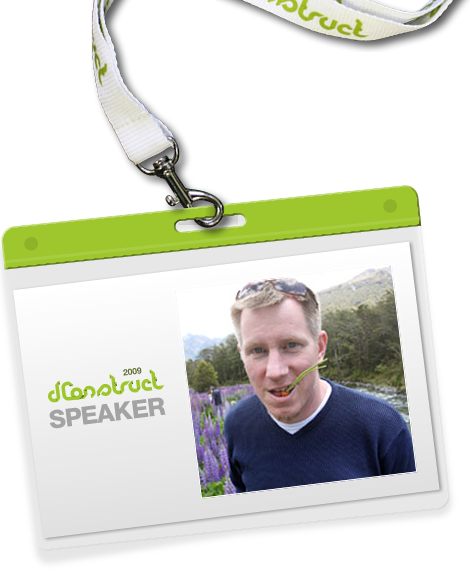 Chris Noessel is an interaction designer and self-described “nomothete” (ask him directly about that one.) In his day job as a consultant with Cooper, he designs products, services, and strategy for a variety of domains, including health, financial, and software.

His prior experience has seen him developing interactive kiosks and spaces for museums, helping to visualize the future of counter-terrorism, building prototypes of coming technologies for Microsoft, and designing telehealth devices to accommodate the crazy facts of modern health and healthcare.

His spidey sense goes off about random topics, and this has led him to speak at conferences about a wide range of things including interactive narrative, ethnographic user research, interaction design, sex-related interactive technologies, free-range learning, and, most recently, the relationship between science fiction and interface design with co-author Nathan Shedroff.

Chris was one of the founding graduates of the now-passing-into-legend Interaction Design Institute Ivrea in Ivrea, Italy. His graduate thesis was the design of a mobile service for lifelong learners, called Fresh. His academic career has continued as he completed a year as an adjunct professor of interaction design for the graduate design program at the California College of Art.

Chris is regularly published online in the Cooper Journal, and is editor and primary author of “Interaction Design for Visible Wireless”, a Chapter in RFID: Applications, Security, and Privacy. His next work is most likely to be about generative randomness. He will likely answer questions about it over a drink.

Make It So: Learning From SciFi Interfaces

Make It So explores how science fiction and interface design relate to each other. The authors have developed a model that traces lines of influence between the two, and use this as a scaffold to investigate how the depiction of technologies evolve over time, how fictional interfaces influence those in the real world, and what lessons interface designers can learn through this process. This investigation of science fiction television shows and movies has yielded practical lessons that apply to online, social, mobile, and other media interfaces.